Dr Richard Coe retired from practice in 2002 in order to focus on the management of the practice. 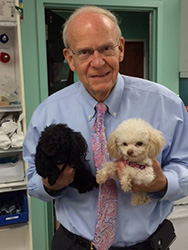 Birmingham, Alabama, with an eye toward earning a degree in business. While there, he adopted a German Shepherd and became interested in animal health and wellness. He continued with his plans to enter the business world, but after a few years of working for American Oil Company, he decided to pursue his interest in veterinary medicine. Dr. Richard Coe enrolled at Auburn University where he completed an undergraduate degree in Animal Science. He then continued on at Auburn University where he graduated with his Doctorate in Veterinary Medicine.

When not overseeing the day-to-day operations of Animal Medical Hospital, Dr. Coe can be found exercising or watching sports, especially professional and Southeastern Conference football. He enjoys traveling throughout the United States to attend veterinarian meetings and is a member of the Veterinary Management Group 1, which shares best practice ideas.

"Every time we come in, everyone at the front desk is always patient, kind and helpful which is greatly appreciated!"